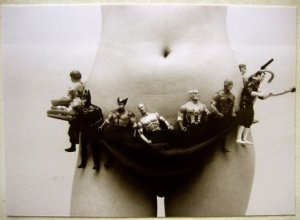 If you’re hiring employees and one of their job duties is to strip search people and look at underwear all day, what hiring criteria do you use?

I didn’t have the nerve to ask this question, simply because I was standing in front of two Tel Aviv airport security guards, with my jeans to my knees.  Yes, the guards were female and I was behind a curtain, but when you’re exposed all you can think about is “how do I get out of here without winding up in a foreign prison?”

How did my jeans end up around my knees?  It all started with needing to buy a last minute ticket from Istanbul (after a super-fun vacation) to Tel Aviv so that I could finally get home to Virginia.

Istanbul is a gorgeous, sea-side town with fabulous views, food, and amazing out-door markets.  (I highly recommend a visit!) On departure day, I learned the flight was overbooked and I wouldn’t make it on the flight.  My second day of trying to leave…flight overbooked.  Third day?  Flight was overbooked PLUS needed a new mechanical part (that was being flown in from London) and may not depart at all. (I grew up in the aviation industry so I’m familiar with delays).  I was anxious to get home by this point (who likes traveling to the airport every day to learn you can’t leave?) and finally decided to buy a ticket within 4 hours of departure, to Tel Aviv, Israel.  I knew if I could get to Tel Aviv, the flights were wide open to Newark, NJ.  I bought the $400 ticket on Turkish Airways (exceptional service!) and enjoyed the 3 hour flight to Israel.

Once arriving in Tel Aviv and after a 13 hour day of travel craziness, I was in awe at how beautiful the Ben Gurion airport is….it’s truly amazing.  However, my elation plummeted to my swollen feet when I learned that for the next hour, I would be interrogated, baggage opened and examined, and strip-searched.  (Your mother reminded you to always wear clean underwear…)

I believe I was flagged because I purchased a last-minute ticket to Tel Aviv from Istanbul and was leaving on the next US bound flight.  I wasn’t staying for a visit.  To top that off…I inadvertently laughed at the security guard when he questioned whether or not someone had given me anything to carry from the time I landed until the point I was trying to pass through his checkpoint.  (like there was time for me to do that!?)  He didn’t find that funny or charming.  And more questions were asked of me that I couldn’t answer…lots of questions about Turkey, names of people in Turkey, places visited, etc.  Before I knew it, my bags were unpacked and swabbed for explosives.  I was questioned further and told what needed to go in checked baggage and what I could carry on.  I had no say in the matter.  Next thing I know, I’m behind a curtain and yes, my jeans are falling to my knees, as instructed. (When did the zipper become a possible threat?)  By the way, I’m a blonde, American female…so I was quite shocked that I was being treated like someone with a plan to bring about destruction and chaos.

I eventually made it to my gate, swollen feet and some dignity left.  This event made me realize how grateful I am for security.  Yes, I had to take off most of my clothing.  But I was safe.

According to the Boston Globe, this airport is one of the safest in the world.  Airport security consists of Israel police officers and border police soldiers that operate in both uniform and undercover.  Almost 13 million passengers move through the Ben Gurion airport and most of those are international passengers.  “The airport has been the target of several terrorist attacks, but no attempt to hijack a plane departing from Ben Gurion airport has succeeded.” (Jacoby)

I’m not here to scrutinize airport security.  The world is not a safe place and measures are taken to ensure safety and civility.  What I do think about is how tough it must be to hire the right people to do the right thing.  Basic employment requirements need to be met, but how does TSA go about hiring the right people?  A sensitive job requires the the right match. Especially when your job entails searching through suitcases (Oh. my.gosh. they didn’t bring that?!) to patting down  someone who could be your grandmother….to seeing a stranger in their underwear (hopefully going commando was not on the travel agenda that day!)